skip to main | skip to sidebar

I was impacted a few years ago by reading David Hawkin’s Power vs Force. The basic idea is that

human effort, will power, soul power the power of the intellect, human charisma all result in the application of coercive force to accomplish goals. Watchman Nee called it the Latent power of the Human Soul. But this is not true power. It is not spiritual power.


True power is the power of surrender; the power of real agape love. It is the power of moral persuasion. The moral influence of a St. Francis of Assis, a Gandhi or a Mother Teresa. In International Relations vocabulary, it is called “Soft Power.

The Evangelical Church is chock full of force.  A large, LARGE percentage of what goes on as spirituality in Evangelical churches is not spiritual at all, it is human force—soul power. And that is why it accomplishes so little of lasting value.

Robert Farrar Capon unpacks this principle in his profound book, Parables of the Kingdom. He calls force “right-handed power” and for moral and spiritual power he uses Luther’s term “ left-handed power.”  In his book he gives example after example of Jesus eschewing right hand power and choosing to exercise left handed power. Of course, the extreme example is suffering and going to the cross rather than calling ten thousand angels!

Here is a quote from Kenny Payne, who blogs on a great web site, describing the difference between right-handed and left-handed power:

“Basically right-handed power is the use of sufficient force necessary to get the desired result. It is helpful in many situations in life, therefore everyone uses right-handed power. But right-handed power is particularly ineffective in one area - anytime you care more about the relationship than about specific results, right-handed power can be more harmful than helpful. That is the time you need to use left-handed power, which is the willingness to give others the freedom to get with your program - or not! This is the power which God most often uses, giving us freedom and asking us to make wise choices. But if we don't, he does not come down hard on us, but continues to give us freedom and space. Although Paul said, "the love of Christ compels us..." that compulsion is completely free.

Capon cites the idea of right-handed and left-handed power as an idea he gleaned from Martin Luther. I have not done the research to verify that, but I am thankful that Capon turned me on to this idea, for I need to remember how God uses his power in my life, and then I need to make sure that I am willing to use left-handed power in my relationships - even when it leads to the cross. That is the highest example of using left-handed power - and living to tell about it! “

Posted by Joseph Holbrook at 9:43 AM 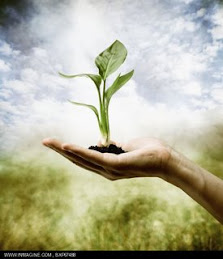 for the good new garden 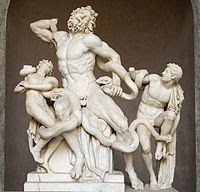 Laocoön and his sons from the Illiad. Laocoön was a Trojan priest of Poseidon (or Neptune), whose rules he defied, Athena became angry with him for warning the Trojans not to trust the horse, but to burn it. She sent two giant sea serpents to strangle and kill him and his two sons. The famous marble statute is attributed by Pliny the Elder to the sculptors Agesander, Athenodoros, and Polydorus, and stands in the Vatican Museums, Rome.